August 27, 2018, started off like any other day in the Herzing home. Except that Bob Herzing, Sherry’s husband of 43 years, didn’t plant his usual kiss on her cheek before he slipped out of the house to help work on a neighbor’s deck.

As she waited for her high school sweetheart to return to their Lake Gaston home, she enjoyed the company of their 4-year-old grandson, Grayson, who had stayed with the couple that weekend.

A little after noon, the phone rang. The voice was familiar and frantic. “Bob is passed out,” the caller told Sherry, explaining that Bob was heading to lunch when he suddenly collapsed.

Every minute mattered as a panicked Sherry handed her grandson to a helpful neighbor and rushed to be by her husband’s side.

A second forwarding failed; the call went not to the Brunswick center, but to South Hill, 15 miles away. Twenty-three precious minutes elapsed before EMTs in Brunswick County were alerted; it took another 24 minutes for them to arrive at the site, where Bob had suffered a heart attack.

A PROBLEM AT LARGE

What came next was “not a Sherry thing, but a God thing,” according to Sherry, a St. Louis, Mo., native.

In the midst of overwhelming grief and confusion, she found a new purpose. “I didn’t want to lose any more lives due to what happened to my husband…a series of mishaps within the 911 response system that had happened before.”

“I quickly became aware of the fact that they weren’t able to fix the problem by themselves. But I had no idea what I was getting myself into, so I asked God to lead me,” Sherry explains.

And, according to Sherry, God did just that.

She would learn that 80% of 911 calls come from cellphones, which are notoriously inaccurate in providing GPS location information. Cellphone towers do not recognize county boundaries, instead sending the call to whichever county is closest to the side of the tower that receives the ping. Further complicating the problem is the fact that Lake Gaston spans 36 miles and runs through five counties and two states.

Roberts made 24 test 911 calls from all over Brunswick County. Of those, only four went to the Brunswick call center. One, inexplicably, was directed to Colorado. “It was nothing short of alarming,” explains Roberts. “The system in place was clearly not working. And this isn’t just a Lake Gaston issue; it’s a rural area issue.”

With three other telecommunicators, Clary was working the day of Bob’s medical emergency. “Once the call actually got to us, the ambulance was on scene very rapidly for a rural area. However, it was 23 minutes before the call actually made it to us. It was very frustrating for us because, in our profession, what we want to do is help—but we need to know where you are in order to send that help.”

Sometimes, reform starts in the most unlikely of places. In this case, it kicked off after a Lake Gaston Ladies Club meeting, with 31 volunteers. Then, as word spread, it burgeoned to a nearly 100-member volunteer task force, called LKG 911 Community Task Force. The mission: Delve deep into the daunting rabbit hole of issues surrounding the local emergency response system.

“I visited the Brunswick County Sheriff’s office and thanked the telecommunicators for all that they've done to help in emergency situations,” Sherry, a member of Mecklenburg Electric Cooperative, says. “They welcomed me with open arms. They told me they were just as frustrated as I was, but that they could only do what the technology would allow them to do. They knew I blamed the system for my husband’s death, and not them. They wanted change just as much as I did.” 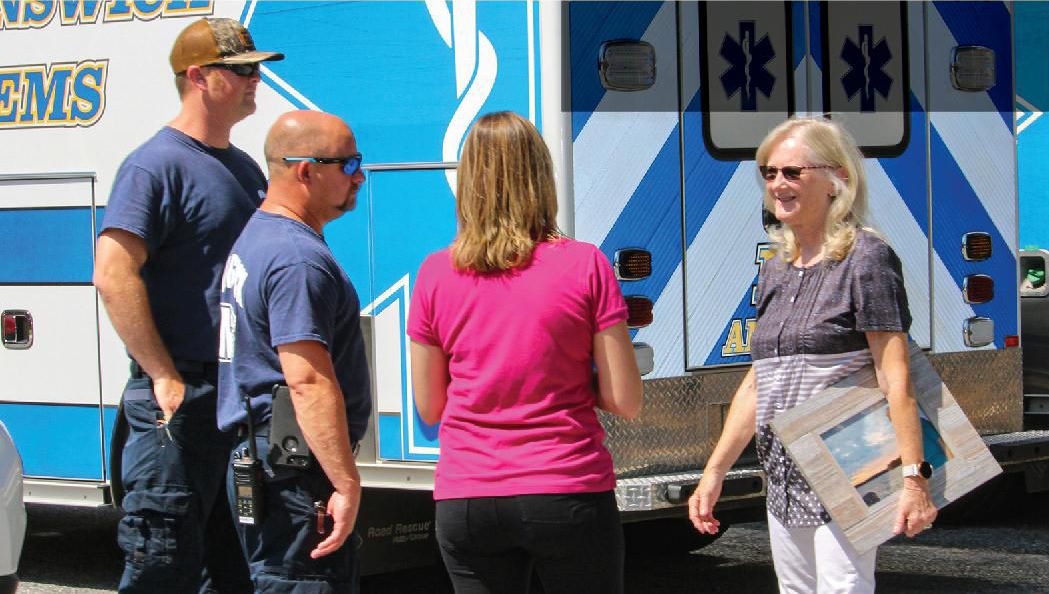 Clary says, “In my entire career, and I have been in public safety since 1999, no citizen has ever come to me and said, ‘Tell me what you do, and tell me what you need.’ Sherry gathered information and made goals. She has led the task force to go out and deliver the messages that we don’t have time to deliver to the public. So, she has truly been our voice.”

With Roberts’ encouragement, Sherry visited all five call centers for the counties surrounding Lake Gaston:Warren, Halifax and Northampton in North Carolina, and Brunswick and Mecklenburg in Virginia.

Telecommunicators also relied heavily on knowledge, instead of updated maps and data. And Sherry found that some telecommunicators were not refreshing computer screens to pinpoint the location of a call. They sent first responders to the tower locations, which was sometimes in the complete opposite direction of where the call was coming from. “I was flabbergasted,” she says.

The more people Sherry spoke with, the more she recognized the scope of the problem was much larger than she had originally thought.

Rural communities have fewer cellphone towers than more populated areas and broadband continues to be an issue. Hiring qualified personnel is also a problem, she notes.

“This is a rural problem. A very

real rural problem,” she says. What ensued was a flurry of community awareness efforts.Whether it was drawing attention to the need for reflective signs at the end of driveways or educating the public on how the process works when they dial 911, Sherry and her volunteer team poured their hearts into each project to raise awareness.

ONE PROBLEM AFTER ANOTHER

Soon, the task force had its sights set on more ambitious goals —in particular, the fact that some of the GIS maps for the emergency call centers had not been updated since 2010. “Anytime we have needed something, God has brought just the right person,” she says.

One of those people was Andy Wells, GIS & IT coordinator at the Southside Planning District Commission. He offered his spare time and talent to the task force, seeking GIS points for all of the boat docks around Lake Gaston, only to find they were unavailable.

“Someone on our committee suggested getting Dominion Virginia Power to link the permit numbers of each dock to the addresses. One dead end after another; it took an entire year to get it done. But we did it,” Sherry says.

The action group also worked to make permit numbers on docks easier to read, and to secure better labeling for the bridges around Lake Gaston.

“We would like the permit numbers issued to be reflective and bridge signs to also have the county listed, so people know what to tell the telecommunicators if they have to dial 911,” she notes. “This is a work in progress.”

Additionally, supervisors at each of the emergency call centers in counties surrounding Lake Gaston now meet regularly. “They started working together for the first time. Every county around Lake Gaston can now transfer phone calls and they all have updated maps and data,” Sherry proudly reports.

Sherry and her task force want to spread the word. “I’d love to take my team to other counties and teach them. We’ll talk about the issues and problems and talk to them about how they can help themselves.”

Though the task force made huge progress, it was hindered by a lack of funding. “Small, rural communities don't have the money to make all the necessary changes, so I decided to take it to the people who can actually create change.”

“I'd love to take my team to other counties and teach them.” – Sherry Herzing 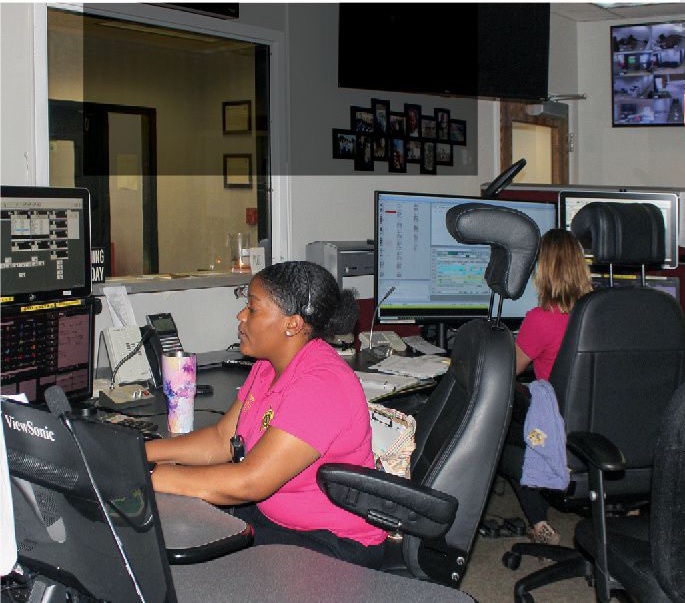 It established an E-911 Border ResponseWorkgroup to assess problems related to the timely routing of 911 calls to the appropriate call centers across state or county borders.

The workgroup met biweekly from February through April 2021 and came up with 14 areas to fix. “Through this workgroup, we have been able to show how everything is connected. You have to have the training, the equipment, the technology and the ability to communicate properly with other counties and states, and, until the federal government gets involved, nothing is going to change,” Sherry says.

In late September, the workgroup will draft legislation for the General Assembly, asking for federal oversight on issues such as broadband, training, attracting qualified people into rural areas and reclassifying telecommunicators. “We have a lot of work to do, but we’re headed in the right direction,” she says.

Quick to brush off any attention from herself, Sherry constantly credits her team. “I feel blessed to have such a wonderful community and team of people working together,” she says. 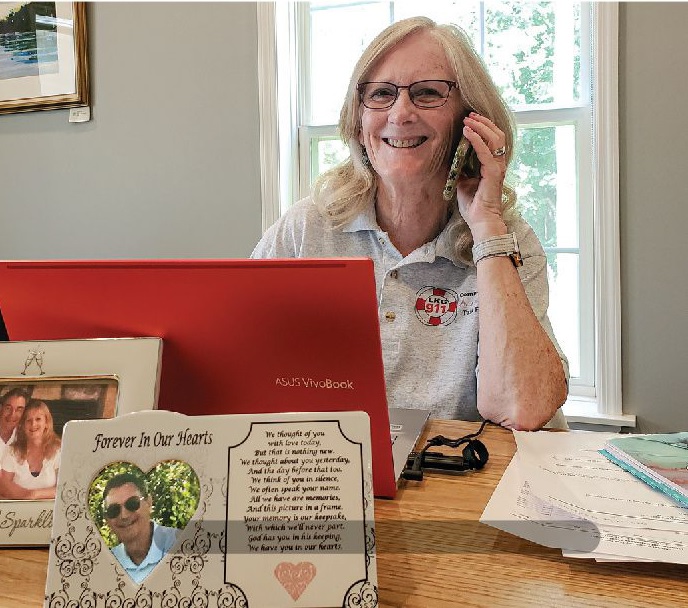 “The reason we have 96 people on our task force is not because of me. It’s because there is a very real need. And you don’t need to work too hard to talk people into being a part of something that is going to save lives and make a difference.”

When it comes to the details on how these things happened in such a short period of time, Sherry smiles. “There were lots of ‘God things’ that occurred,” she says. She explains that the story of Mordecai in the Bible has given her strength throughout her journey.

“What kept me going was in the book of Esther, Mordecai asked Esther to do something she could have been killed for, and she asked, ‘Why me?’ To which he said, ‘Because God put you in this position for such a time as this,’” she says, getting emotional.

After a pause, she continues: “I need to make my husband’s death worth something…to help it not happen to others. It’s a problem in rural areas and it needs to stop.”

TIME TO SWOON OVER SOME SWANS. Precious babies take a ride on their mother's back. Photo sent to us by Cooperative Living reader Sue Borders. Thanks for sharing your photo with us, Sue!Got a photo you'd like to share with other Cooperative Living readers either online or in print? Please email them to [email protected] with caption info. ... See MoreSee Less

In case you missed this story in our September issue.... ... See MoreSee Less

YOU ALL SCREAMED FOR ICE CREAM! We were so happy to see so many of you dropping sweet ice cream trail photo submissions in our inbox! So many smiling faces! Thanks for joining in on the fun and being a part of the Cooperative Living Ice Cream Trail! #icecreamcl ... See MoreSee Less